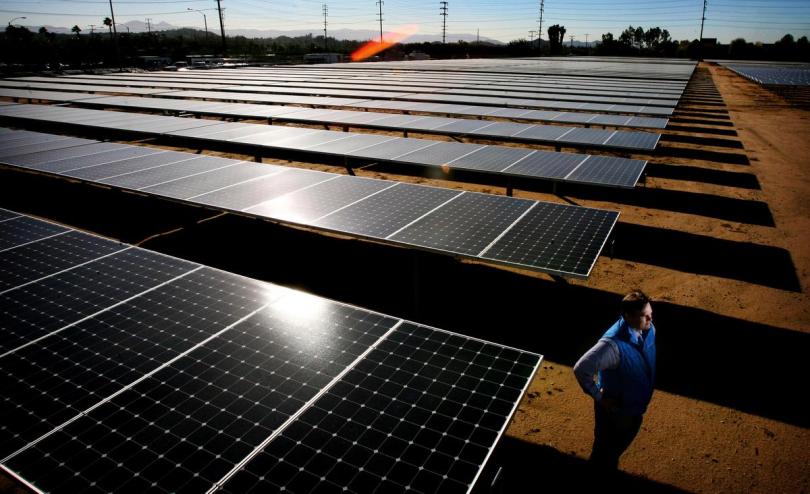 For most of the 20th century, Riverside residents dumped their residential trash on 125 acres near the Santa Ana River.

By the mid-1990s, the landfill was closed and deemed a leaking environmental mess. The city fenced it off and spent nearly $14 million to stop it from polluting groundwater and the air.

The site still requires a network of underground pipes to collect methane gas emitted from the rotting garbage.

It is the kind of solar development that scientists affiliated with UC Riverside would like to see more of. They advocate creating clean energy on land already degraded by humans that is near where people need electricity.

But in a study recently published in the scientific journal Proceedings of the National Academy of Sciences, those same scientists found that most of California’s large-scale solar projects have caused new environmental problems by consuming land important for wildlife habitat, agriculture and recreation.

Researchers looked at 160 California solar projects big enough to provide electricity for at least 200 homes, and found that most – more than 130 – had potential land-use conflicts.

They also found many solar farms have been built far from urban areas, increasing the need to build long-distance power lines, which consumes even more land.

“We as Californians need to come together and understand the tradeoffs,” said Rebecca Hernandez, lead author of the study and a former research specialist with UCR’s Center for Conservation Biology.

“It is clear we have been making really poor siting decisions when there are so many opportunities to make win-win decisions,” added Hernandez, now a postdoctoral researcher at UC Berkeley.

Preferable locations include former landfills, such as the one in Riverside, and industrial sites, in or near cities, as well as shade structures above parking lots, and rooftop systems big and small, the study says.

The study gives a nod to Germany, the world’s leader in solar production, which has put about 90 percent of its projects in places that are already developed.

Riverside’s landfill project is one of several such projects in the Inland area that go beyond the growing number of home rooftop systems.

Riverside County, for instance, last year invested $54.6 million for solar panels, including parking lot shade structures and ground systems at two sheriff’s stations and eight other county facilities. The county’s savings on electricity more than cover its cost for these solar systems, while its employees get shady parking spots.

UCR last year put solar panels on about 10 acres between a parking lot and Interstate 215 that had gone unused for more than a decade.

The small solar farm provides about 3 percent of the university’s electricity, said John Cook, director of sustainability at UCR.

And the 1.8 million-square-foot Skechers warehouse in Moreno Valley has solar panels on much of its roof.

But these are exceptions.

Many large-scale solar projects, some blanketing several square miles, are consuming wildlands known by biologists for high plant and animal diversity, said Michael F. Allen, director of the Center for Conservation Biology and a co-author of the study.

Allen said he is particularly concerned about projects being built on lands near protected areas. Bighorn sheep and other animals migrate between protected areas, and solar projects and other development constrain their movements and fragment their habitat.

“They are moving across the areas, and they colonize different areas,” Allen said. “If their migration potential is constrained, that reduces their long-term viability.”

Hernandez added that about 30 percent of larger solar projects are on crop or pasture lands, mostly in the Central Valley, when there is a growing world demand for food.

Sean Gallagher, vice president of the Solar Energy Industries Association, was critical of the study.

He said the authors failed to take into account extensive environmental reviews that occur before any project can be permitted by counties or state energy officials. And projects sought for federal lands go through additional reviews overseen by the federal Bureau of Land Management.

Gallagher added that solar industry officials have been working with federal and state officials developing the now pending Desert Renewable Energy and Conservation Plan, which strives to protect sensitive areas in seven counties, and limit wind and solar development to areas with the least amount of conflicts.

“We are trying to minimize and avoid impacts,” he said.

The Ivanpah solar “power tower” plant in northeastern San Bernardino County, which started up in late 2013, displaced about 175 desert tortoises, a species threatened with extinction. Officials had expected no more than 38 to be displaced.

Also, birds get burned when they fly into the hot zones near the tops of the plant’s three 459-foot towers.

Construction of the Genesis solar plant about 25 miles west of Blythe in 2011 and 2012 unearthed about 3,000 Native American artifacts from an ancient lakeside village site. Federal officials rejected pleas by the tribes to bypass the area.

And the Desert Sunlight Solar Farm was built in eastern Riverside County amid concerns that it crowded and impaired views from the nearby Joshua Tree National Park.

“We are not opposed to solar energy,” said Allen, one of the study’s co-authors. “It is our future. We just have have to be smart about it.”

Share This
More News
Let us help you with your search