The Center for Conservation Biology has an established office and lab at UCR’s Palm Desert Campus dating from that campus’ opening in 2005. From this vantage we have become integrated into local and regional desert conservation initiatives, providing science input to support the success of these programs. From our involvement we have generated unprecedented long-term data sets on vegetation, arthropods, and vertebrates, enabling us to look at biodiversity writ large. The long-term nature of these data allow us to partition human impacts from the weather driven-dynamics of these species, and identify resilience and sensitivity to those anthropogenic changes across multiple taxa. Specific projects include: 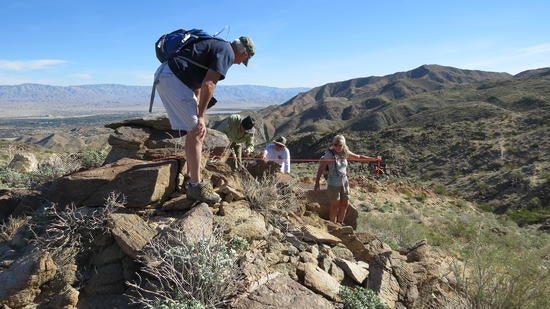 We live on a planet with rich, complicated patterns of biodiversity and on a planet that is increasingly dominated by one species - us. We depend on that biodiversity for ecosystem services such as clean air, clean water, food, medicines, recreation, and for many, spiritual fulfilment. At its core, Conservation Biology strives to understand the impacts of humans on natural biodiversity, and where that biodiversity is degrading work, to recommend solutions that find balance between these sometimes competing forces. UCR's Center for Conservation Biology - UCR Palm Desert Center – Coachella Valley projects epitomize that statement. We work with the National Park Service at Joshua Tree National Park, the Department of the Navy at the 29 Palms Marine Base, the Bureau of Land Management on their Santa Rosa and San Jacinto Mountains National Monument, with the US Fish and Wildlife Service on their Coachella Valley National Wildlife Refuge, and with local governments through the Coachella Valley Association of Governments. Questions we are addressing range from the impacts of habitat fragmentation, invasive non-native species, habitat disturbance and climate change. Whenever possible we include community scientists in answering those questions. We have tested, and found that the data collected with volunteer community scientists is equal to and sometimes exceeds the quality of that collected by trained scientists alone. We have found that the key to maintaining and improving upon the quality of data we collect is that we work with these volunteers, shoulder to shoulder. Teaming with these volunteers we increase the cost efficiency of what we do, and perhaps most importantly, we help create a public that understands, and advocates for, using science to address the pressing questions we face with regard to our impact on this planet. 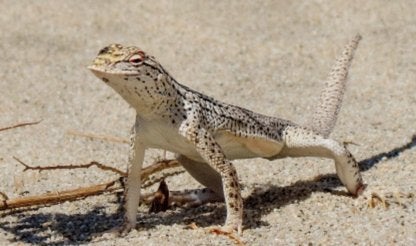 This has evolved from a single species focused plan, designed and initiated in 1986 and one of the very first habitat conservation plans authorized under the federal Endangered Species Act. Currently 27 species and 27 vegetation communities are the “covered” conservation foci under this plan. Our data have allowed us to examine the effects of fragmenting habitats (genetic shifts and extirpation on the smallest, most isolated sites), boundary effects (intensified predation near power lines and suburban edges), and invasive species (competition, altered physical processes, reduced diversity in food webs). The long-term character of our data are allowing us to measure species responses to climate changes as it happens. Species response models are full of insights, but nothing compares to real data. We are already seeing some surprises with sand dune obligate species. Being habitat restricted, these species don’t have the options to shift to higher elevations or more northern latitudes; the models indicate these species are among the highest at-risk species from climate change. However the data say different – at least so far; after four or more years of drought and the hottest years on record, these species are breeding and sustaining populations whereas adjacent, non-dune species assemblages are showing definite signs of distributional shifts. 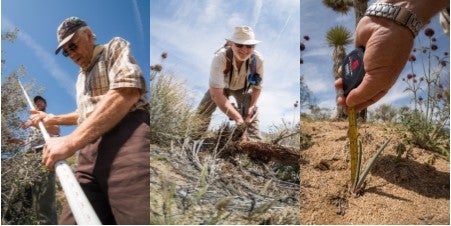 Here, in collaboration with the National Park Service, we are testing predictive models regarding species’ sensitivity or resilience to climate change, as well as identifying climate refugia, areas where species may not have to move to sustain populations in a warming and more arid future. The challenge is to implement a survey program that is sustainable for the necessary long-term data sets needed to validate or improve those models. Our solution has been to incorporate citizen science volunteers. Our data include species’ abundance, diversity, demography and condition for perennial vegetation and reptile communities on 27 nine hectare plots ranging from the lowest to the highest elevations of the Park. After three years we have been able to confirm that using citizen scientists, paired with trained ecologists, has yielded greater quantity and quality data than could have been achieved with the limited number of available trained ecologists alone. As many of the volunteers come to us from Earthwatch (an international non-profit organization), they have through their contributions, funded a large portion of our research costs.

Let us help you with your search